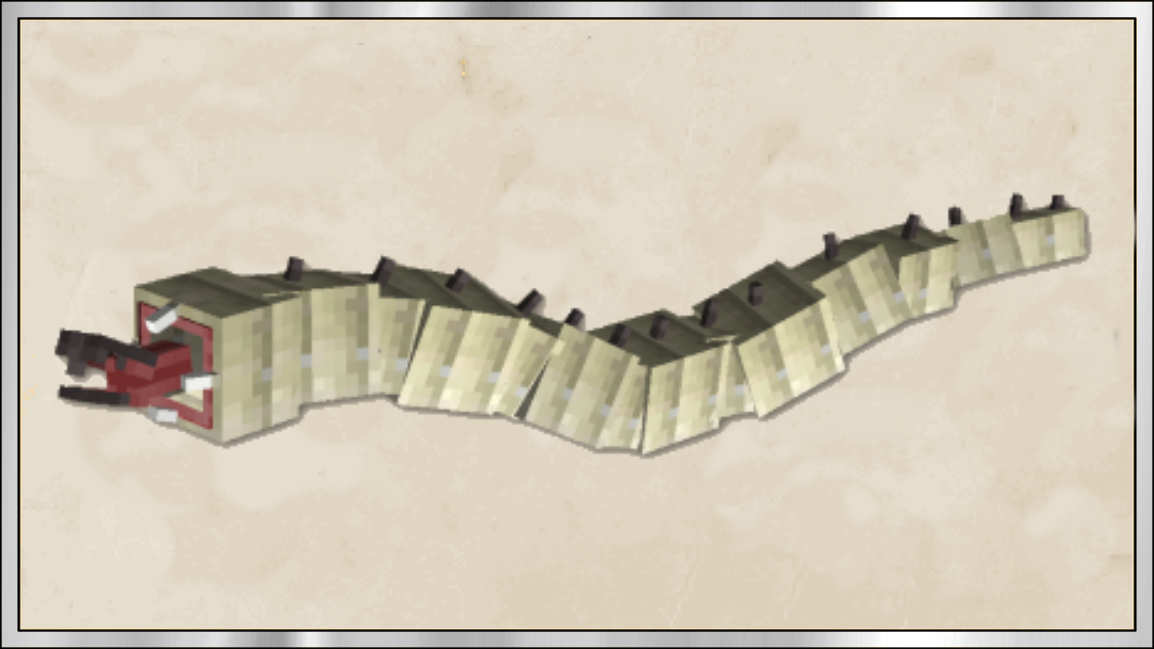 Death Worms are edacious desert-dwelling worms that burrow through the sands and eat anything they come across.

Death worms are giant, segmented worms with a serpentine physique, a body covered in hard, chitinous armor, a row of spines running down their dorsal sides, and a large, cavernous mouth adorned with protruding, pointy teeth and housing a retractable tongue ending in a serrated beak. They come in 3 colors: tan, white, and red.

Death worms can be found burrowing through Desert biomes.

Death worms are hostile, and will attack everything that comes nearby, including players and dragons. When attacking, death worms will usually lunge out of the sand and extend their beaked tongue to snap at prey, dealing a considerable amount of damage (depending on how big the worm is). However, larger worms are known to occasionally lunge out of the sand in a manner so powerful that they launch sand over a wide area; how powerful this attack is correlates with the worm’s size. The largest death worms are colloquially known as giant death worms; they can withstand many attacks from the player before dying, their bite attacks do a lot of damage, and their sand blast attacks can leave large craters in the deserts.

If a block of TNT is dropped near a death worm, it will eat the TNT, only to explode and die a few seconds later.

Endermen will also kill death worms, although this may be a glitch as death worms lack eyes.

A wild death worm cannot be tamed, and a tame death worm can only be acquired through throwing an egg. Upon hatching, the death worm will start out at a tiny size, and will patrol the area it spawned in within a 50 block radius. It cannot be told to sit or follow its owner, and it will not come to defend its owner when they are being attacked; however, it will not attack its owner or any nearby animals, only targeting monsters that come within its hunting grounds.

It takes several days for a baby death worm to reach adulthood.

If the player has 2 fishing rods in their hands (with the second fishing rod being in the player’s off-hand slot), they will be capable of mounting a death worm (whether it be tamed or not). Like with any rideable mob, WASD controls are used. Spacebar makes the death worm jump, and Shift is used to dismount. G makes the death worm use a strike attack, attacking the mob the player is currently looking at. However, it is not recommended to ride an untamed death worm, as once the player dismounts, the worm may turn on them, and they may end up being its next meal.

Riding death worms is currently not recommended, as riding them can activate a common bug that has a chance to break your world.